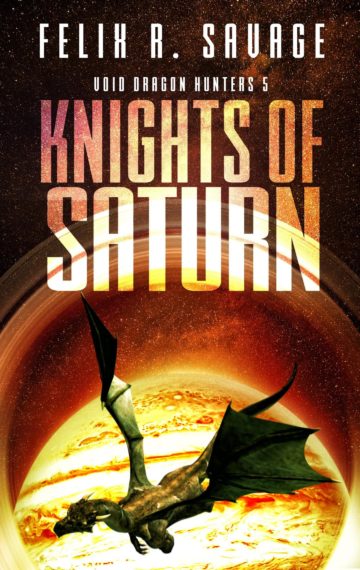 Betrayed and undermined, the Dragon Corps is in tatters.

Scarred by losses, the Dragon Corps is placed under ADCON by the Department of Defense. Jay Scattergood returns to Earth with his Void Dragon – and finds himself reluctantly spearheading a plot to break a traitor out of prison. The daring strategy enmeshes Jay and his friends in conflict with their own side, as they struggle to head off a calamity caused by the traitors who sided with the Offense.

Jay and Tancred have one last chance to save humanity. But enemies surround them on all sides. The Void Dragons are exiled from Earth. Their only hope is to flee … into Offense territory.

The final battle is coming. The Void Dragons will face their ultimate test at Saturn.

Knights of Saturn is the fifth and last book in a new military sci-fi series starring the Void Dragons, a race of space dragons who eat stars. The latest action-packed saga from New York Times bestselling sci-fi author Felix R. Savage has it all: space battles, humor, a cast of unforgettable characters, scientific speculation, and dragons!