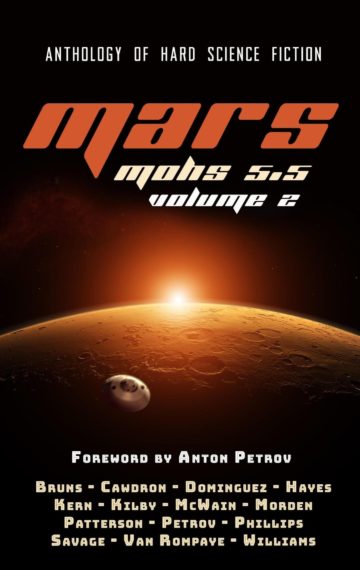 My story in this anthology is called THE ORACLE OF MARS.

“A precognitive AI acts as guardian to a crew of workers terraforming Mars. When the AI predicts an act of destructive sabotage, the crew’s chaplain must act to check the danger if Mars is ever to be inhabitable.”

The time has finally come for humanity to conquer Mars. Or die trying.

Though robotic explorers have vastly increased our knowledge about the Red Planet, there’s still so much we don’t know. Will Mars be a second home for humanity? Or will it usher in our destruction?

Thirteen hard science fiction writers take on the big questions in this groundbreaking anthology, which grapples with real-life scientific puzzles and dilemmas in the format of thrilling short stories.

MOHS 5.5 stands for scientific rigor, and MARS stands for non-stop excitement. Explore the fourth planet from the sun in the company of authors such as Peter Cawdron, S.J. Morden, Gerald M. Kilby, Felix R. Savage, Douglas Phillips, and Ralph Kern. Plus a foreword by YouTube/What Da Math’s Anton Petrov!