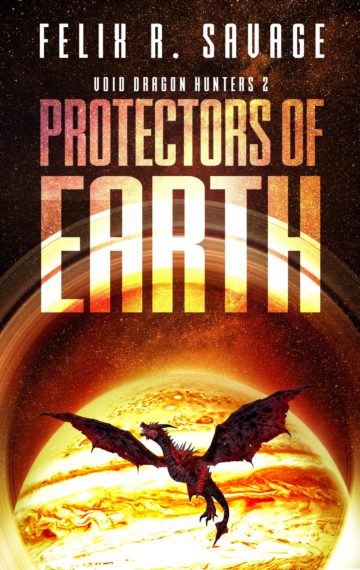 Jay Scattergood spent most of his life hiding his Void Dragon egg.

And then it hatched.

An adult Void Dragon ate the sun a century ago. But now the Void Dragons may be humanity’s last hope in their war against the Offense.

If we can get to the Void Dragons first.

Leaving his baby Void Dragon behind, Jay and his crew hunt for more Void Dragon eggs that are said to lie buried in the snows of Europe. Earth, now orbiting Jupiter, is far colder than it used to be – and much more dangerous. But the bitter cold and gene-modded wolves may not be their biggest problem. Their very own Department of Defense appears to have it in for them.

A dangerous discovery tests their loyalties.

With the salvation of humanity hanging in the balance, who can Jay trust?

Protectors of Earth is the second book in a new military sci-fi series starring the Void Dragons, a race of space dragons who eat stars. The latest action-packed saga from New York Times bestselling sci-fi author Felix R. Savage has it all: space battles, humor, a cast of unforgettable characters, scientific speculation, and dragons!