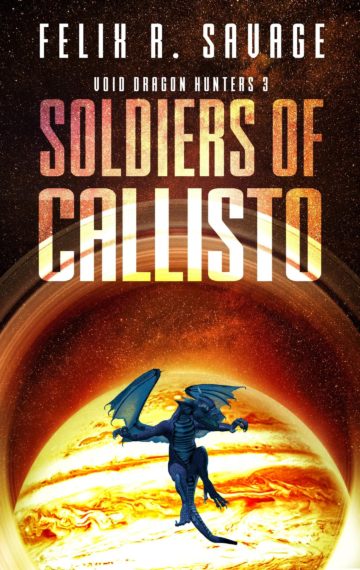 Tancred goes into battle in the skies of Callisto …

… while Jay fights through a watery hell on the surface.

Finally given a chance to join the war against the Offense, Jay Scattergood’s young Void Dragon, Tancred, struggles to prove himself against alien space fighters. Callisto is now an ocean world orbiting the new star of Jupiter, where humanity and the Offense maneuver mighty fleets of battle rafts against one another. Jay and his friend Francie have a mission: to interdict the Offense’s supply lines.

But on an ocean world, the lines of battle are fluid. An enemy attack plunges Jay and Francie into the epicenter of a lethal sea battle. Can their Void Dragons save them on a world covered with water?

Under the seas of Callisto, a challenge to the Void Dragons is approaching, silent and deadly.

Soldiers of Callisto is the third book in a new military sci-fi series starring the Void Dragons, a race of space dragons who eat stars. The latest action-packed saga from New York Times bestselling sci-fi author Felix R. Savage has it all: space battles, humor, a cast of unforgettable characters, scientific speculation, and dragons!