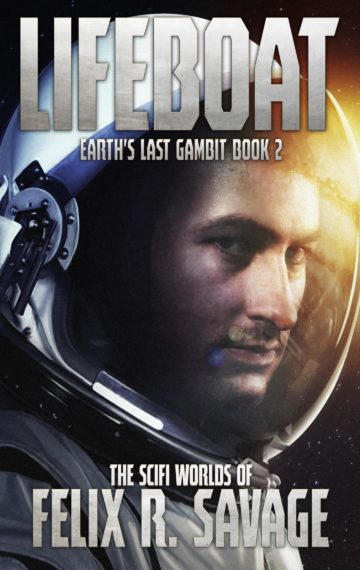 Listen to a sample
$2.99Buy Now!Read A SampleRead The ReviewsSee The Full Series

The crew is at breaking point.

Bearing Earth’s hopes for deliverance from the alien threat, Jack Kildare and his fellow astronauts successfully complete the long journey to Jupiter. But someone on board is trying to sabotage the mission. As they approach the mysterious alien spaceship orbiting Europa, the crew fractures into rival factions.

Without warning, a long-range attack cripples the human ship.

Now the broken crew is the least of Jack’s worries.

The alien spaceship isn’t a wreck, after all.

And whoever is on board wants the humans dead.

As the mission unravels into a desperate fight for survival, Jack struggles to decode the enemy plot. If he fails, the astronauts will all perish … and so will Earth.

You’ll love Lifeboat because it’s a a scarily plausible first contact thriller blending hard science fiction and edge-of-your seat action. You won’t need a calculator to follow the story, but if you’d like to build a spaceship to the Spirit of Destiny’s specifications, it really will take you to Jupiter! ($300 billion budget not included.)

“Prepare to be Savaged in this masterpiece of Sci-Fi adventure, that leaves you stunned, awed and captivated as you follow the desperate plight of the crew of the SoD!”

“Thumbs up, ready for the next round of excitement! Great sci fi. Each day of reading is like the next episode of my favorite show.”

“I absolutely loved these books! I couldn’t put them down. The personalities of all, human and alien alike, were intoxicating.”